Tom Clancy Ghost Recon Breakpoint is a military shooter set in a diverse, hostile, and mysterious open world. The game is the successor to the award-winning game Tom Clancy’s Ghost Recon Wildlands and can be played entirely solo or in four-player co-op.You slip into the role of a Ghost, an elite soldier who is stranded behind enemy lines and is now fighting for his survival. Steep slopes, accumulating injuries and exhaustion are the new challenges to overcome. As you create your ghost, you’ll have thousands of customization options for your equipment – build, upgrade, and expand the weapons you need. A new class system also gives you complete freedom whether you want to roam silently as a Panther, Storm Soldier, or Sniper.

The game will be officially released on October 04, 2019, but depending on the edition, it may also be possible to receive and play the game up to three days early.

The Limited Edition is exclusively sold through Amazon UK* for £54.99 GBP and includes in addition to the game the Off-Road Pack which will give you access to two powerful vehicles, the Trail TX Motorbike and the GX Spider Buggy

The Aurora Edition of Tom Clancy’s Ghost Recon Breakpoint is only available in Europe and is sold exclusively through GAME in the UK. For £57.99 GBP you’ll get the game and the following digital content:

Pre-orders can be placed at Game UK*.

With the Gold Edition of Tom Clancy’s Ghost Recon Breakpoint you can play the game three days early, starting on October 1st. In addition to that you’ll also receive the Year 1 Pass digital Content which includes the Siren’s Call mission, the Special Operation Forces Pack, two upcoming immersive Adventures and early unlock of three classes. The Gold Edition is available worldwide and can be pre-ordered at GAME UK*, Amazon.com* or Bestbuy* for £84.99 GBP or $99.99 USD.

The Gold Steelbook Edition of Tom Clancy’s Ghost Recon Breakpoint is exclusively available in North America and includes all the content from the Gold Edition plus an exclusive Steelbook. Pre-orders can be placed at BestBuy* for $109.99 USD.

The Ultimate Edition comes just like the Gold Edition with a three day early access to the game and includes in addition to that the following digital content:

The Ultimate Edition can be pre-ordered at GAME UK* or through the official Ubisoft Store for £92.99 GBP or $119.99 USD. 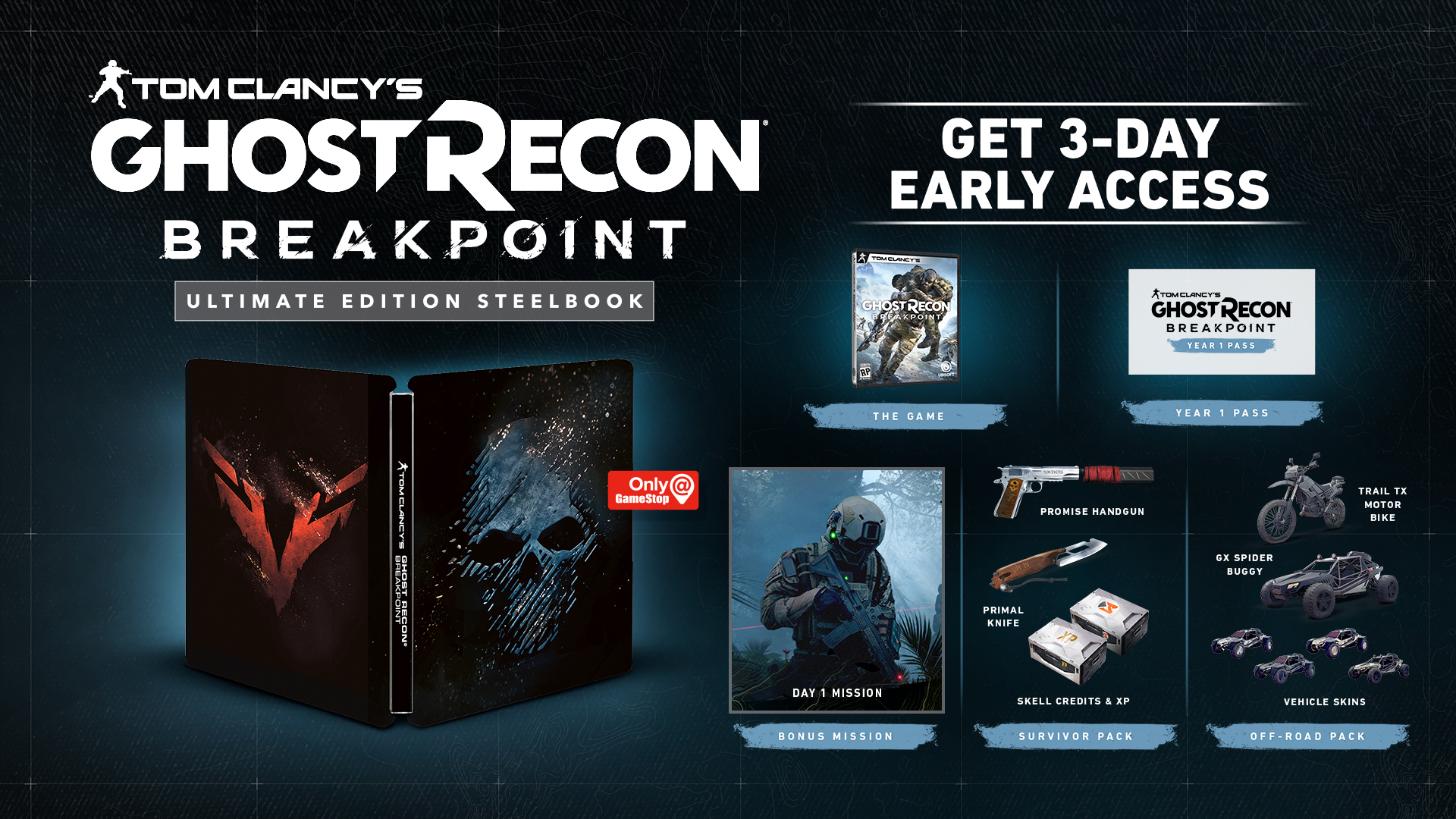 The Wolves Collector’s Edition is the most prestigious edition of Tom Clancy’s Ghost Recon Breakpoint. It includes the following content:

The Wolves Collector’s Edition retails for £159.99 GBP and $189.99 USD respectively and is exclusive to the official Ubisoft Store (UK / US).