Shadow of the Tomb Raider Editions Put You In The Poorhouse

At a Square Enix event in London, Shadow of the Tomb Raider has now been officially revealed to the world. The game is the third and final entry to Lara Croft’s rebooted series. It is scheduled for release on September 14th, 2018. In Shadow of the Tomb Raider you experience Lara’s defining moment as she becomes the Tomb Raider and how it has affected her. On your race to save the world from a Maya apocalypse you have to master a deadly jungle, overcome terrifying tombs and face off against the shadowy Trinity organization.

In addition Square Enix has unveiled details about what we can expect from the various special editions. Depending on where you live, there are several editions to choose from.

All Editions mentioned above are available as digital copies and can be pre-purchased through your favorite platform store. If you’re looking for a physical version of the game you should check with your local retailers such as GAME UK* and BestBuy*. 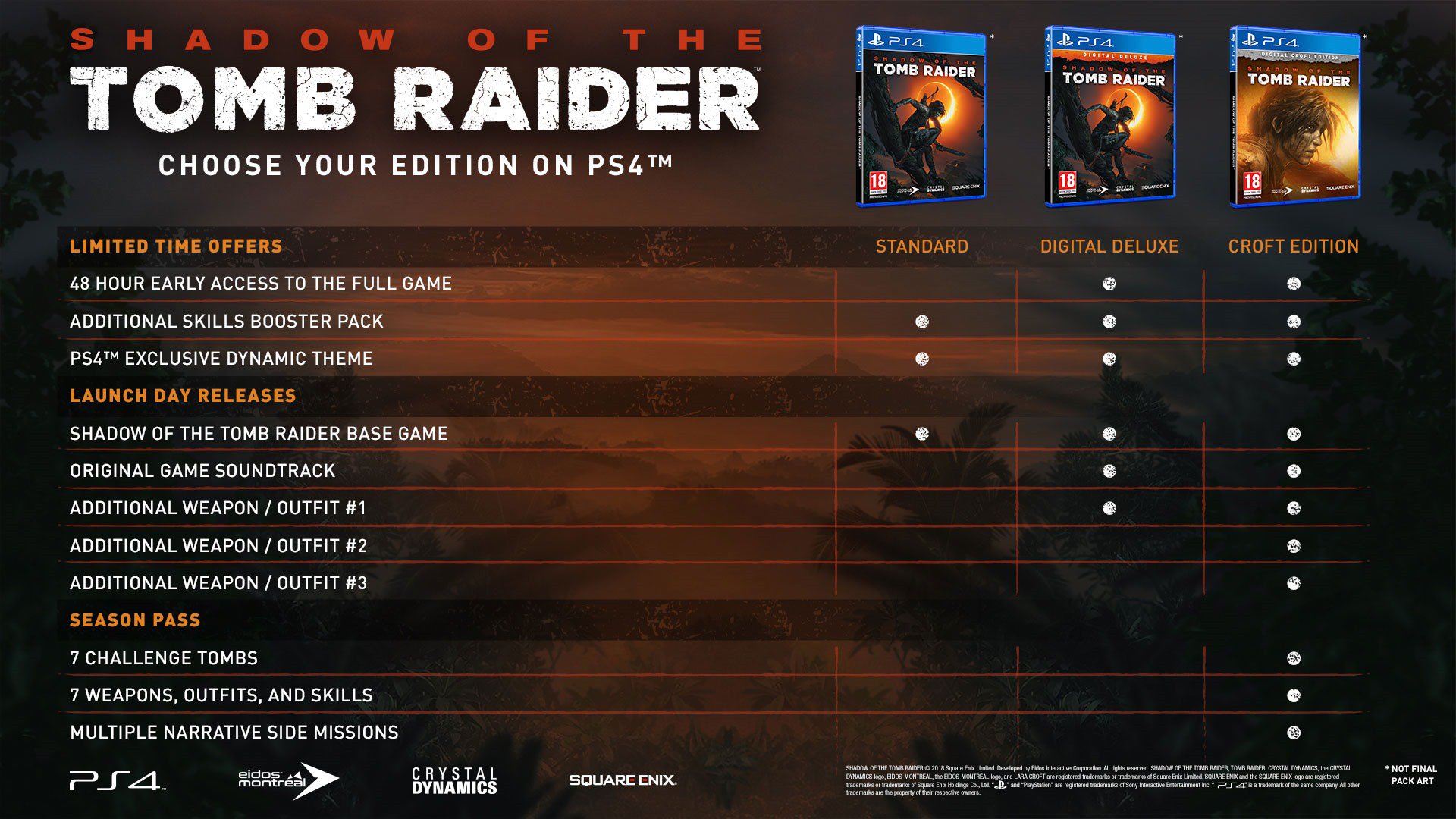 While the digital bonuses are all nice to have, a real Tomb Raider can’t say no to a shiny Steelbook. So if you are interested in those metal cases you should definitely check out the following Editions.

The Steelbook Edition of Shadow of the Tomb Raider is exclusively sold in Europe and includes, in addition to the Standard Edition of the game a nice looking Steelbook as well as three art cards. Pre-orders can be placed at GAME UK either as a standalone Edition* or as a bundle* with the Lara Croft Totaku.

Shadow of the Tomb Raider Limited Steelbook Edition (US) – $69.99 USD

Except for the name the Limited Steelbook Edition offers people from the United States the exact same content  as the European Steelbook Edition above. Pre-orders can be placed at Amazon.com* and of course BestBuy* for those of you who have a Gamers Club membership.

Shadow of the Tomb Raider Croft Steelbook Edition (US) – $89.99 USD

The Standard Edition of the game is not enough for you? Well, how about the Croft Steelbook Edition? The Shadow of the Tomb Raider Croft Steelbook Edition gives you the best of both worlds: A physical Steelbook, three art carts and all the digital content mentioned above including the Season Pass. Sounds good? You can place your pre-order right away at Amazon.com* and BestBuy*. 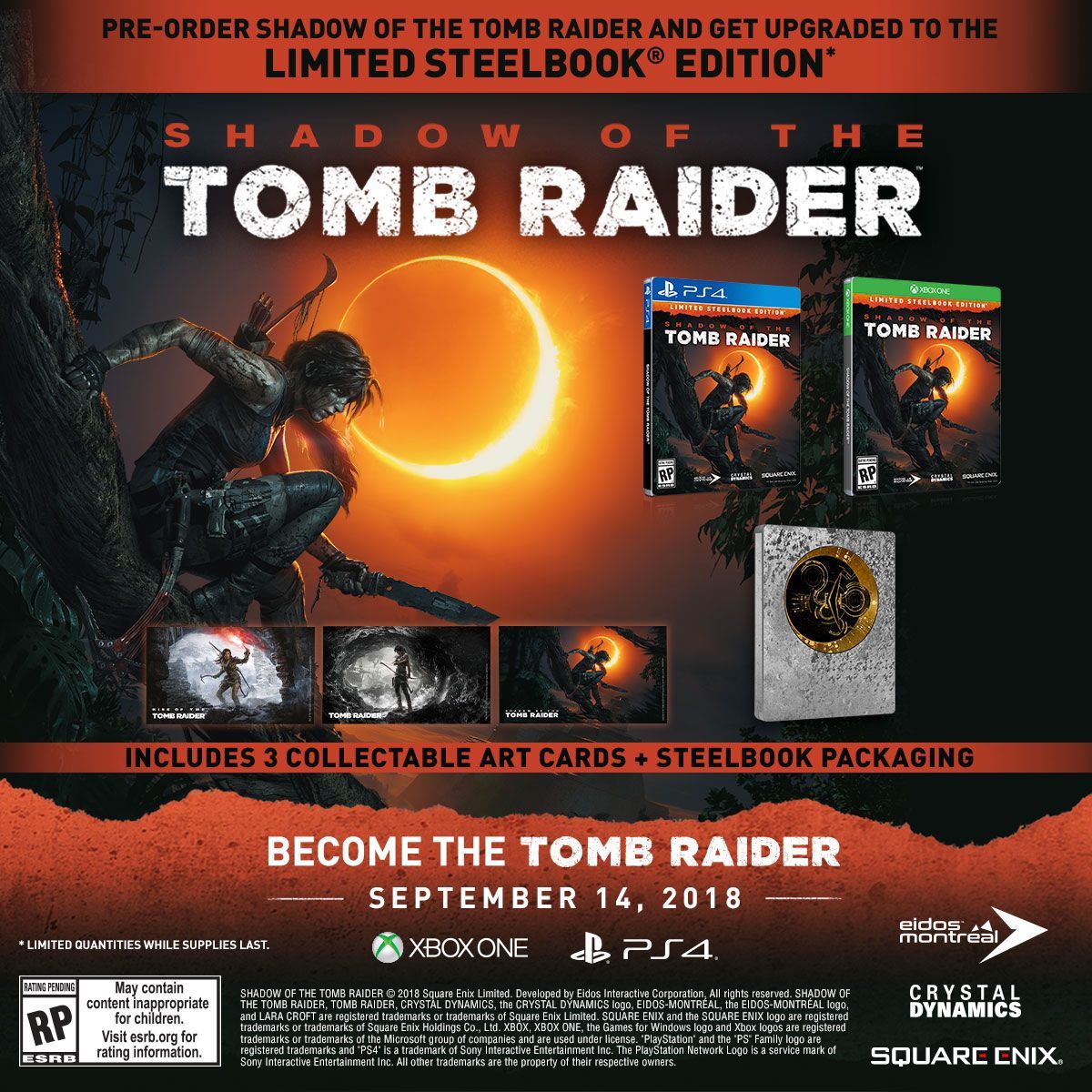 The Ultimate Edition of Shadow of the Tomb Raider is the most comprehensive version of the game, and includes the following:

The Ultimate Edition retails for $199.99 USD / £179.99 GBP and is exclusively sold through the Square Enix Store (US / EU). At the time of writing the Edition appears already as “sold out” but you can still join the online store’s waiting list. I have used it before with the Final Fantasy XV Ultimate Edition and got several chances to place an order after all. So just be patient and don’t fall for those scalpers on eBay! 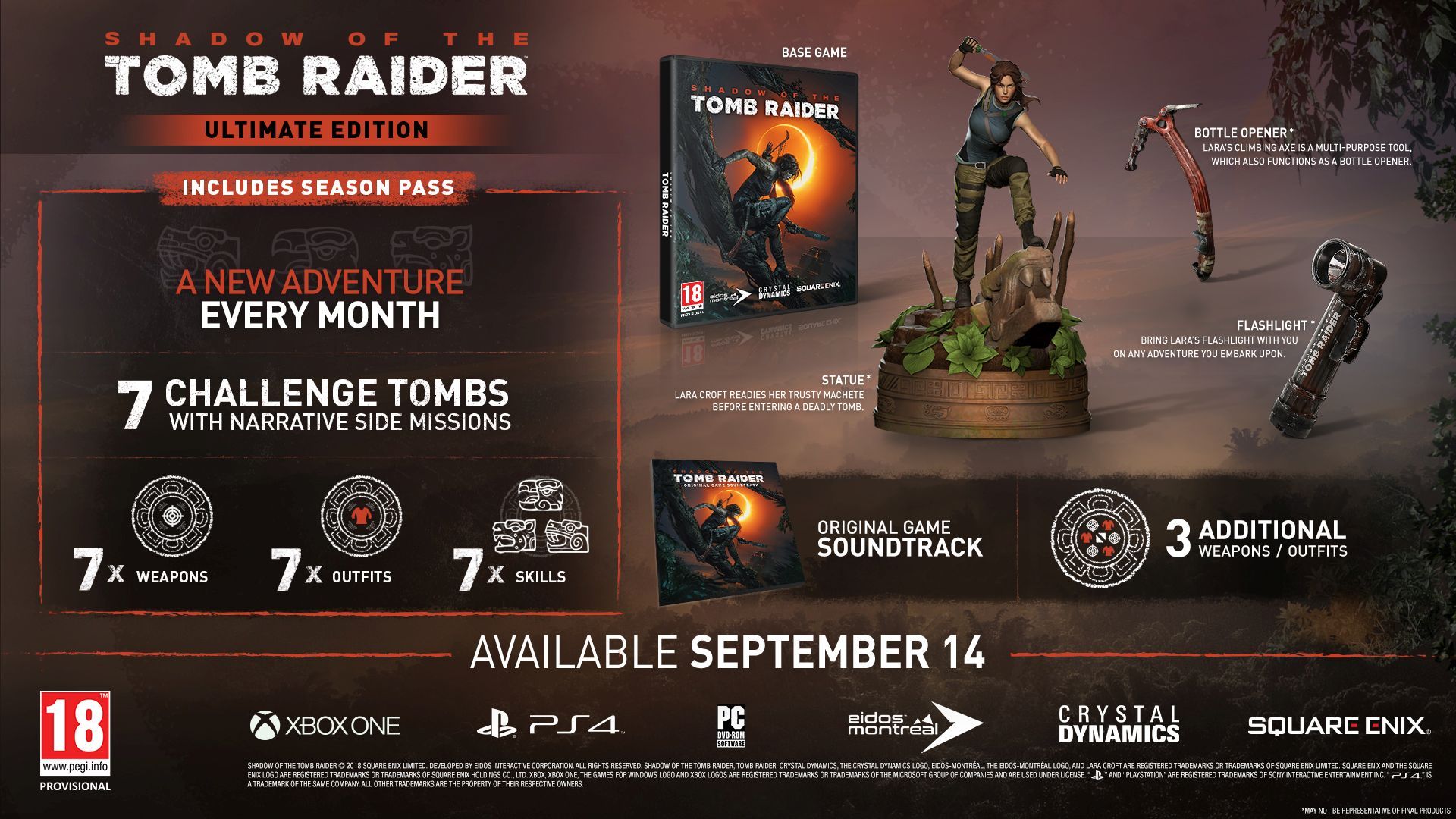 Pre-Order at the SE Store US